Soon after the 2016 ACHNE Research Priorities were released, the Research Committee began grappling with perspective designs. They deliberated on whether to employ a Research “to” Practice (R2P) or Research “for” Practice (R4P) mentality to guide them into the second decade of the 21st century.

By June 2017, ACHNE Research Committee volunteer members collaborated to modernize funding priorities for 2020. Four workgroups were established: a Core Team, a Review Team, the Executive Review Team, and External Reviewers. The roles of each of these teams will be presented in follow-up publications. The entire team was comprised of nurse researchers, educators, practice professionals, and various types of public health and community-based agencies representing all geographic regions of the country.

The figure below depicts the various subcommittees and task groups making up the team. Although the overall team was not comprised of multiple disciplines (interprofessional), it was diverse because it represented a wide variety of nursing academic and practice professionals (intraprofessionals). In addition, the team assessed multiple clinical issues, focusing on the overarching exigency for community-based population health.

Subcommittees and task groups of the Review Team

As a result of teamwork and collaboration, the teams proposed a Research in Action reality established from empirical evidence. The empirical evidence was gathered by completing a research study and using an evidence-based practice (EBP) process. In May 2019, the Research in Action Model was adopted by the Research Committee.  The model combines findings from an integrative review and an EBP process.  Ultimately, ACHNE’s Research in Action Model aligns Community/Public Health Nursing Education, with ACHNE’s Mission and Strategic Goals in order that high-ranking research findings inform practice and education with bi-directionality. The idea is that as research studies and EBP project priorities are unified. The Research Committee contends that unified effort is where membership activity begins. That is, by members collaborating with one another to develop studies, projects, and other scholarly papers such as innovative teaching strategies, assignments, rubrics, and web enhancements, synergy will be created. Further, unified effort will set forth evidence related to Community/Public Health Nursing Education into motion (practice). 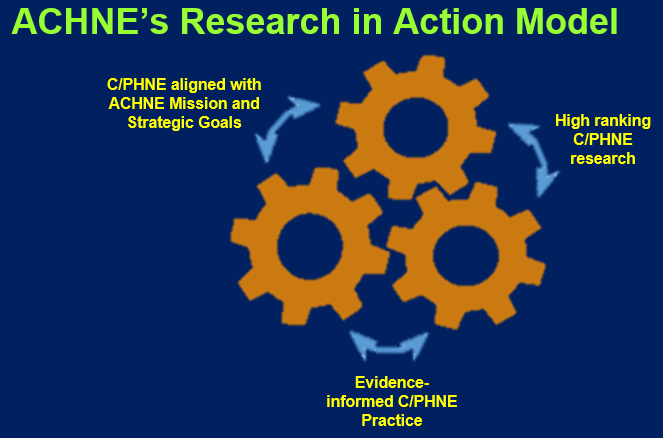 Research Priorities from the Integrative Review

The research study team set out to answer the question: What are the associated concepts of nursing practice from public health and population health that are integral to undergraduate and graduate nursing education in the future? Whittemore and Knafl’s (2005) five-step integrative review process was followed. Fifty-two articles were identified using the key terms: nursing education, population health, community health, public health, graduate, undergraduate, recommendations, and future trends. Teams found that ACHNE is addressing clinical teaching strategies and working with partners in environmental health, emergency response, and culture. The team recommended the following research priorities to upscale research to high-level designs and measurements that adhere to the scientific process. Specifics on how the research priorities were identified are pending dissemination through publication. The four research priorities are listed below. 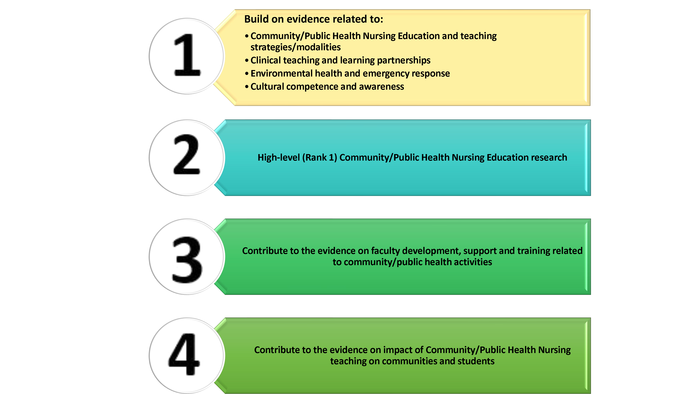 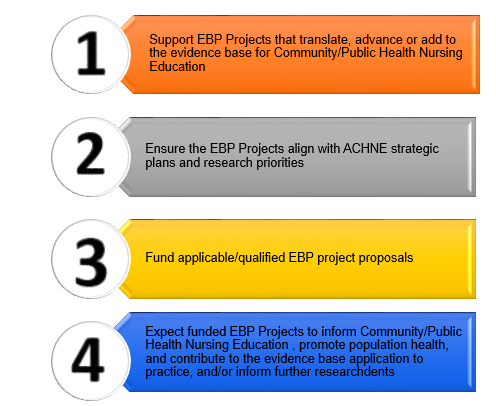 Examples for Priorities “in Action”

Future work is all about tailoring design and measurement, and adhering to the scientific process in order that high ranking evidence is translated to practice. Below are some examples of how the ACHNE Research Committee envisions implementation of the priorities. Observe how the alignment between theory and practice emerging as unifying efforts.